Perfect pizza dough is easier than you think with this quick pizza dough recipe that results in traditional Italian-style, fluffy crunchy crust pizza.

I’ve made a lot of pizza dough from many different recipes over the last few years. This recipe is a summary of those experiences, tweaked into a basic, quick, easy homemade pizza dough recipe. 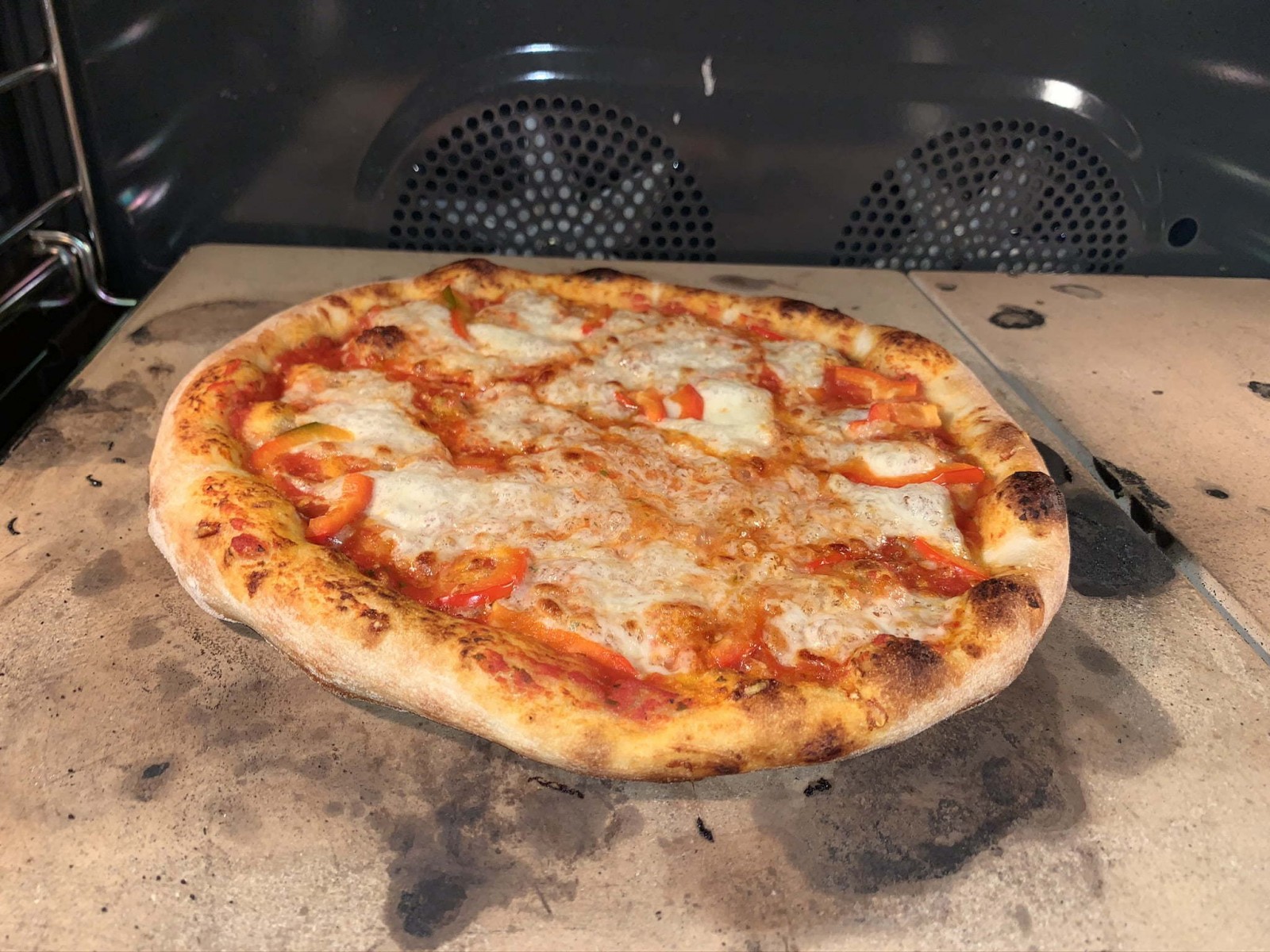 Making pizza dough at home from scratch is easy, enjoyable, and it’s inexpensive. And it really doesn’t take much time. It also makes way better pizza than frozen or delivery pizzas, and you can make it ahead of time and freeze it for later use.

This recipe is a summary of my pizza dough recipe experiments over the years. Despite trying more complicated dough building techniques like autolyze and starters, this simple recipe seems to outperform them all.

It also offers a the simplicity of a stand mixer recipe that produces a ready-to-ball dough in a little over an hour. Use this dough after a few hours of fermentation at room temperature, or preferably after a the dough has proofed for a  few days in the fridge. The dough can be frozen for more extended storage after the initial fermentation or after the extended fridge proofing.

Although this dough recipe calls for the use of a stand mixer, it can easily be made by hand by substituting a few minutes of hand kneading instead of the stand mixer kneading in the recipe.

Named for their very fine “00” mill grind and processing, these flours produce a very soft, super-fine, high-strength flour. Many pizzerias use these flours as the sole flour for their pizza dough or in combination with bread flour, often as a 50:50 mix.

Using Italian flours for pizza dough will slightly change the texture and character of the dough. It may also provide digestive benefits, as they are manufactured from Italian and European wheat, which is often reported to be better tolerated by those with domestic gluten intolerance.
Try these flours as a direct substitute for the bread flour in the recipe or as a mix.

This recipe suggests using 100% bread flour for simplicity and availability shake, but Italian Tipo 00 flours can be found fairly easily online or in specialty grocers, and used in place of bread flour.

Add the warm water, malt and yeast to the bowl of a stand mixer, or a large mixing bowl. Stir and let sit for 5 minutes.

After several minutes, should notice a light foam forming at the top of the surface of the water, sugar and yeast mixture. If no foam is noticed, your yeast may be dead - discard the mixture and start again with fresh yeast.

Next, add the flour, olive oil, and salt to the bowl containing the yeast mixture. Using the hook attachment, mix at low speed or with your hands for 2 minutes to combine. The dough will be rough and shaggy at this point. Cover the bowl with plastic wrap and let rest for 10 minutes.

* A Note About Measuring Ingredients *
Buy and use a bakers scale for measuring baking ingredients. It's easy and more accurate, and you can tare the bowl weight and add ingredients directly to the bowl on the scale.

Knead the dough using the dough hook attachment for the stand mixer set at the lowest speed setting for 3 - 5 minutes until smooth.

Alternatively, if kneading by hand, use the heals of your palms to push the dough out, then fold the dough back on itself, then turn the dough 90 degrees and repeat until smooth and strong enough that the dough can be stretched thin without breaking.

After kneading the dough and allowing to rise for 60 minutes (or after bulk cold fermentation of the dough), transfer the dough to a floured surface to divide and ball the pizza dough.

If using a bakers scale, start by weighing the entire pizza dough batch. Divide this total weight by the your desired individual pizza dough weights - typically between 220 - 350+ grams, 220 - 270 for single serving pizzas and larger, several-serving pizza size for the 300+ gram weights.

If not using a bakers scale, divide the dough into fist-sized balls of dough for each pizza.

This standard recipe about makes enough dough (~ 630 grams) for two medium sized pizzas, each serving about 2 adults. If making a single recipe as above, plan on dividing the dough in half.

You may use your dough balls after a few hours of room air temperature proofing or preferably after a day or two of slow fermentation (proofing) in the refrigerator.

I often do both. When I make a batch of pizza dough, I typically make a double batch (total of 750g of flour), which yields 4 medium dough balls. This is about the dough capacity of my standard size stand mixer. Of these four dough balls, I bag three of them and place in the fridge for overnight proofing and leave one out on the counter top for a few hours to shape and eat later that evening.

Then, I will either make pizza again the following day or two with one of the refrigerator proofed dough balls and put the remaining dough balls into the freezer for later use. To use the frozen dough ball, I take it out to thaw on the counter at room temperature for three or so hours prior to using it. Once it is room temperature, it will shape nicely and make great pizza.

For the dough ball I plan to use right away, I usually just place it in a covered, floured bowl large enough to allow the ball to rise and expand. It should be ready to use in 2 to 4 hours.

For the dough balls I plan to place in the refrigerator and freezer, I usually place them in either a small covered, floured "proofing" pan, or just in floured quart-size Ziploc bags.

The process of refrigerator cold fermentation or proofing is common among serious pizza makers, and is thought to produce a more complex flavor profile more favorable flavor and gas profile to the pizza dough. So even if I plan to freeze the dough balls, I'll let them proof in the refrigerator for a few days prior to transferring them to the freezer.

The dough is then divided and balled after this bulk fermentation and used after the individual dough balls proof for another 12 - 48 hours of cold fermentation. This is often a preferred technique of professional pizza makers and reportedly results in "better" pizza with a more complex flavor profile and texture.

The trade off of bulk fermentation is time. Bulk fermentation delays the balling and use of the dough. I will occasionally bulk ferment pizza dough if I am planning for a special event. Does it make better dough? Probably. If you have time it is likely worth the time and effort, at least to try and compare to dough that is immediately balled.

Once warm, carefully remove the dough from its container or plastic bag and place on a floured surface or pizza peel, using care not to lose the shape nor gas within the dough.

Gradually turn the dough while pressing down and out from the center of the dough and shaping it. Stop short of the edge of the dough to form the crust and not lose trapped gasses from the dough. This outer gas ridge forms the pizza crust.

Once the dough has flattened and with the crust ring starting to form, drape the crust over the tops of your hands so your knuckles are at the groove formed by the crust ring. Gently turn and stretch the dough over your knuckles to increase the size of the pizza, letting the weight of the dough stretch itself. Target the outer portion of the dough while stretching, as the center will naturally thin on its own.

Once the dough reaches the size of your pizza peal or transfer sheet, flop it onto a floured or mixed flour/cornmeal work surface or pizza peel for dressing. The pizza should be topped and moved to the oven quickly after it is shaped to help avoid the dough sticking to the counter or peel. Many Italian pizzerias dress the pizza dough on a floured work counter and only transfer the dressed pizza onto a pizza peel to move it to the oven, reducing the tendency of the pizza to stick to the transfer peel.

To help avoid the pizza dough sticking to the transfer peel, give the peel several shakes back and forth occasionally while dressing to keep the dough free on the peel.

If working with the dough on a pizza peel, give the peel an occasional shake to ensure the dough is not stuck to the peel surface. If you have trouble with sticking pizza dough, you can top the pizza dough on parchment paper and cook the pizza directly on the paper - I don't do this and I think most purist would cringe at the suggestion, but it might work for you.

Bake your pizza at the hottest setting your oven has. For most domestic residential ovens, it will be around 500 ℉. Use a pizza stone or steel if possible, and preheat the oven and the stone or steel for 30 - 60 minutes prior to baking the pizza. Bake until crust is golden brown. 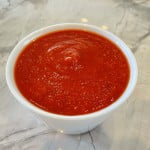